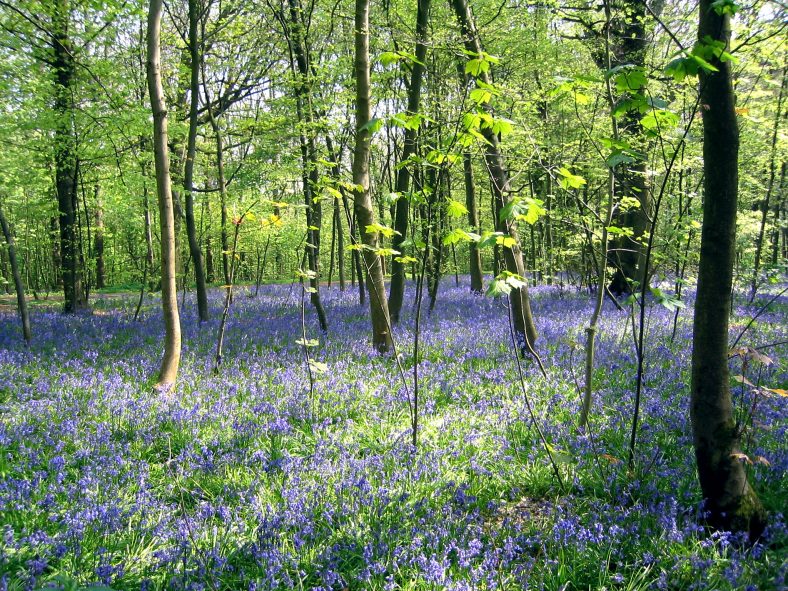 English Bluebells (Hyacinthoides non-scripta)
Bluebells are unmistakable bell-shaped perennial plants. They actually spend the majority of their time underground as bulbs, emerging, often in droves, to flower from April onwards.
Leaves:- are narrow, around 7mm to 25mm wide and 45cm in length. They are strap-shaped, smooth and hairless, with a pointed tip.

Flowers:- usually deep violet-blue in colour, bluebells are bell-shaped with six petals and up-turned tips. These sweet-smelling flowers nod or droop to one side of the flowering stem and have creamy white-coloured pollen inside. Some bluebell flowers can be white or pink. Up to 20 flowers can grow on one stem.
Often confused with the Spanish bluebell (Hyacinthoides hispanica), which is very similar in appearance to the British bluebell. However, Spanish bluebells grow upright, with the flowers all around the stem, not drooping to one side like the British bluebell. Some feel that the Spanish bluebell is the dominant of the two species and if left unchecked may eventually lead to the extinction of the British bluebell.
For years The Great Wood at Stanmer was home to Brighton’s largest English Bluebell wood, however many of the plants have been and continue to be destroyed by Off Road Cycling. The same disaster is also happening to the Bluebells in Millbank Woods.