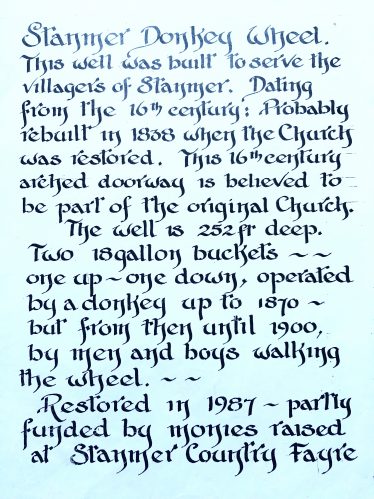 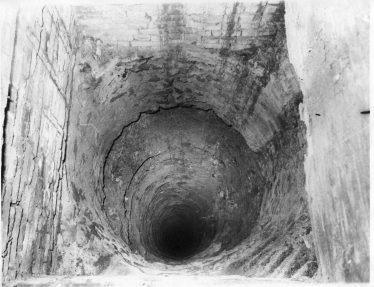 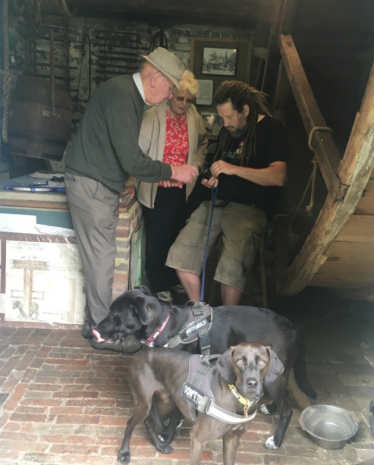 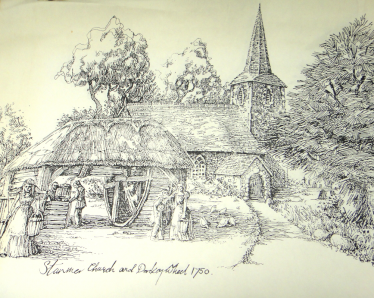 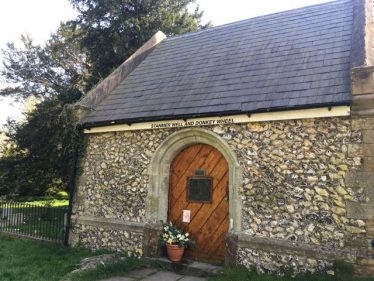 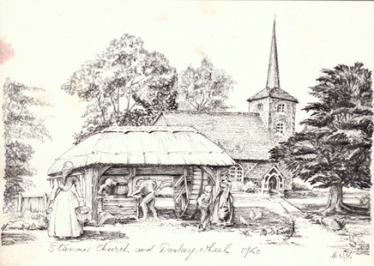 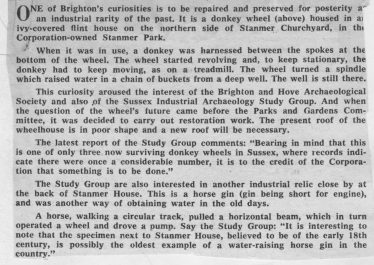 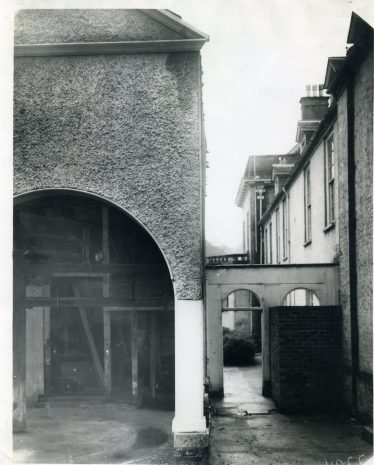 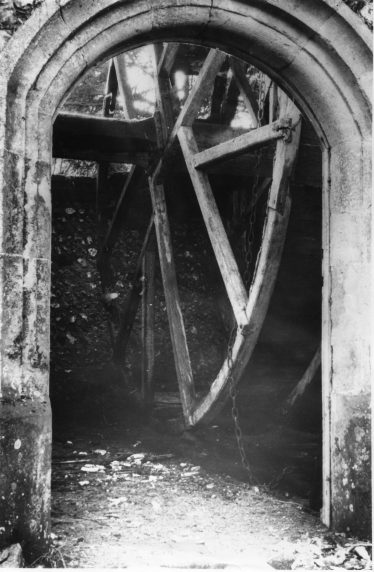 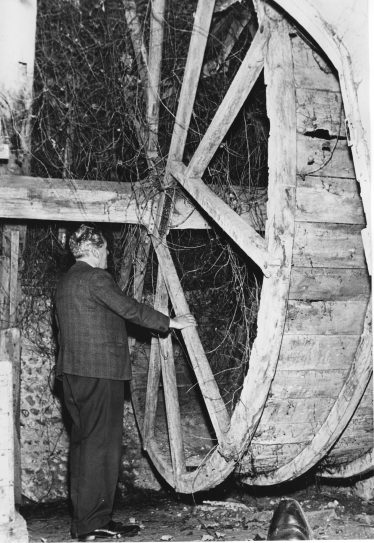 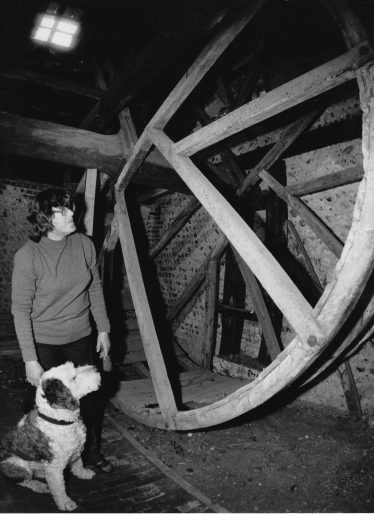 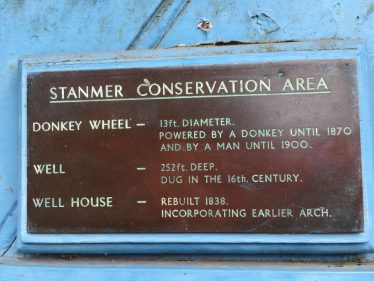 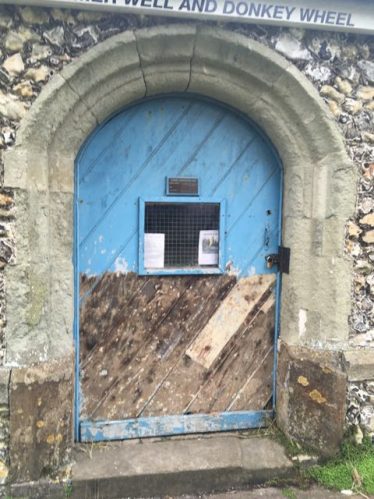 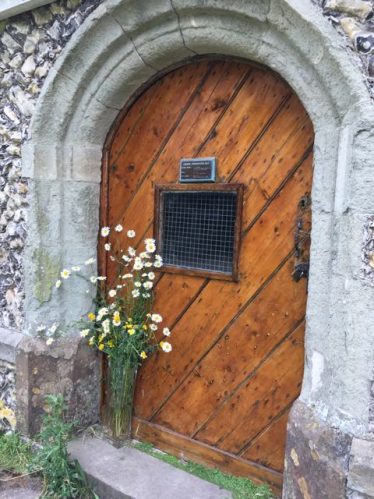 There isn’t any surface water in the chalk surrounding Stanmer – no stream, river or spring – leaving villagers reliant on fetching water from the Church pond which, at about 100-150 feet above sea level, is the lowest point in the area.

“When the well is dry, we know the worth of water.” ― Benjamin Franklin

The water supply from the pond was vulnerable to evaporation during hot summer months and prolonged periods of low rainfall. To overcome these challenges of finding, it was necessary to dig a deep well to supply water to the villagers. It has been suggested that the donkey wheel itself was created in the 16th century in order to take away the excavated rubble. The well was approx. 180 feet deep (56 m) to the surface, but of course, water levels fluctuate depending on how much rain falls, but it is frequently about 30 feet (10m) deep.

However, in 2018 the village well ran dry, and when measured, the base was found to be 225 ft , or 78 m deep. But when SPS volunteers investigated further, a much deeper borehole was discovered. Apparently it had been common practice in medieval times for boreholes to be excavated at much greater depths than the well base, presumably tapping into an alternative water source in order to ensure that there was always access to water for human and animals. How this further borehole was dug, or by what method any water was withdrawn, is as yet unknown and merits further investigation.

The well itself was dug about 500 years ago during the 16th century.

To dig the well the workers used ladders and hand tools. They dug down and then cut into the side to fit a shelf. They then fitted another ladder as they dug down etc. (photo of the model)

The donkey wheel is probably about 250 years old (see Charlie Yeates’ drawings of the thatched house and wheel). This one may not be the same as the one you’re looking at and probably came from another location. The donkey would walk inside the wheel. This would activate the wynch to wind up the bucket with water in it. Two full buckets on a yoke would be carried to the family house. (see photo of yoke on the wall)

Stanmer Church was damaged by fire and rebuilt in 1838-9. It believed that this small house was built from materials left over from the reconstruction. Previously, there had been two entrances to Stanmer Church, one to the south for the Pelham family’s use, and one to the north for the villagers. It is believed that the door of the donkey wellhouse once graced the southern porch and the old villagers’ door moved to the bothy opposite the Palm House.

Can you find the oldest thing in Stanmer ? Look for the fossil sea urchin in the flint to the right of the doorway, outside, at eye level.

Everyone in Stanmer village would have used this well. There were families with lots of children living here. Also the house that pre-dated Stanmer House would have used the water. Eventually ‘ the big house had its own well and method of drawing up water – a horse engine (gin), possibly the first of its kind in the country. This was a similar contraption with a horizontal wheel and the horse would walk round on  the flagged floor. This is no longer open to the public since its in the area where houses have been built adjacent to Stanmer House.

On the door you’ll see a brass plaque that says in 1870 the donkey was replaced by men and boys. In 1900 the new Brighton Water Works ran a pipe into Stanmer village to a stand pipe outside cottage no1. The wheel and house became obsolete and locked up until 1947 when a museum was created in the village. When it was eventually re opened, wood worm had attacked the wheel. New planks were fitted by SPS some years later.

John Lawrance and others