You are here: HomenextPlacesnextStanmer Church WORK IN PROGRESS

The knapped flint church is Grade II listed and has a particularly special interior with original carvings and fittings. It was built in 1838, but records of a church here go back to the 13th century and it has been a place of worship since the 8th century.

More recent records, however, have been lost and it is not known to which saint the church was dedicated. There is no documentary evidence of the fire that consumed the earlier flint church, nor is very much known about the identity of the architect or the builders. Sue Berry has

Until the Covid pandemic struck in the Spring of 2020, SPS volunteers regularly raised funds to pay for heating and lighting the church since it was declared redundant in 2008 and ensured that the church was open to the public every Sunday afternoon, come rain or shine.

Under licence from the Diocese, the SPS created events ranging from hands-on heritage craft displays, musical performances, talks, presentations and concerts, and an introduction to our resident brown long-eared bats.

A survey performed with help from Friends of Friendless Churches shows that building repairs are becoming urgent to keep the building standing. We are in discussions about how best to raise the money to do this.

Anglican church, without a dedication. 1838. Flint with stone dressings, roofs of slate, shingles to the spire. Chancel, nave, north and south transepts, west tower and spire. In the Early English style. EXTERIOR: the east end has short gabled angle buttresses and an east window of 3 stepped lancets. All other windows have double chamfered reveals; those to the north and south sides of the chancel have trefoiled heads; pointed-arched entrance flanked by colonnettes to east side of south transept which has, on its south face, 3 stepped lancets; 2 paired and one single lancet to nave; west door in tower with double chamfer and hoodmould with head-stops; the tower has angle buttresses with 2 offsets; paired lancets to north and south with a circular clock opening above; the belfry has lancets flanked by colonnettes with hoodmoulds and head- and ballflower-stops; embattled parapet jettied out on decorative corbels; recessed octagonal spire. INTERIOR: walls of stone. Chancel panelled to east end; stone reredos with 3 trefoiled niches, the 2 outer niches decorated with foliage ornament in relief; panelled roof to chancel with moulded ribs and decorative bosses; chancel arch, and arches to north and south transepts, multi-moulded; arcaded screen to north transept; west organ gallery carried on slim quatrefoiled cast-iron columns, the balustrade having blank trefoiled arcading; panelled roof to nave, the trusses in the form of shallow pointed arches with decorative arcading in the spandrels. Monument in the north wall to Sir John Pelham, died 1550, removed from Stanmer House (qv): kneeling figures set within an architrave and surmounted by the Pelham arms. Organ of 1839, built as a mechanical organ by W Pilcher of London. 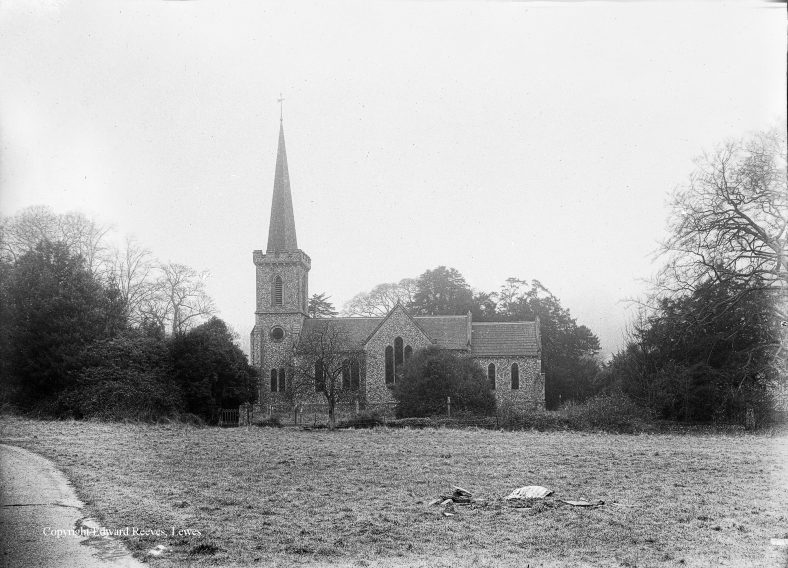