You are here: HomenextPeoplenextSpencer Mugridge and The Mysterious Stone Circle at Piddingworth

Spencer Mugridge and The Mysterious Stone Circle at Piddingworth 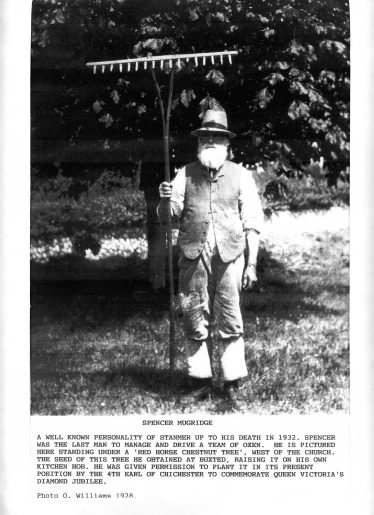 “During the Twenties, the location attracted a great deal of attention from local archaeologists, who considered the area of some historical importance.

“Mr Toms, curator of Brighton Museum, was a frequent visitor, in search of artefacts of archaeological interest. Great was his excitement when he made what he thought was an immense discovery in the middle of a field near Piddingworth. Here was a small belt of trees known as Granny’s Belt. The title self explanatory.

A circle of stones

“Investigating this belt of trees, he found inside several large greyweathers ranged in a rough circle. These ancient stones had evidently been there for a considerable time. Some were half buried, with trees and bushes grown up around them. Certainly the circle was not a natural formation.

“Hurrying back to Brighton, Mr Toms wasted no time in informing his colleagues at the Brighton Archaeological Society of his discovery. The site was visited by experts, who examined the greyweathers. With a stone, flat topped and in a position to have been used as an altar, the archaeologists were quite carried away, most convinced they had stumbled on something akin to Stonehenge or Avebury.

Mr Tom’s learns from a local

“Articles appeared in archaeological papers and the local press, exclaiming the importance of the discovery. Mr Toms, a frequent visitor to the site, was returning from Granny’s Belt when he met an old man in the village and stopped for a chat.

“A fine patriarchal figure with a long white beard, a real Father Christmas type. More than likely he was the oldest inhabitant, a good source of local information. Spencer Mugridge, for he it was, always ready to oblige. In a rich Sussex accent, he would give long discourses of life in the parish in bygone days, often rewarded for his trouble with sixpence pressed into his hand.

“Oi knows all about them stones up there in Granny’s Belt. “

“I don’t know what, if anything, he was given by Mr Toms after a conversation they had concerning the mysterious stones. ‘Yus, Oi knows all about them stones up there in Granny’s Belt. When Oi were young Oi often ploughed up to Piddin’worth with me oxen. Them great stones wuz in the ground an we used to hit em with the plough. We drug em out an put in Granny’s Belt there.’

Ending in a public apology

“Poor Mr Toms was more than a little discomfited by this news. All his ideas of fame for his remarkable discovery discounted. He was forced to make a public apology and admit he had made a mistake.”

p.169. A stone circle at Piddingworth, part of the Stanmer Estate.

Comments about this page