You are here: HomenextPeoplenextSpencer Mugridge 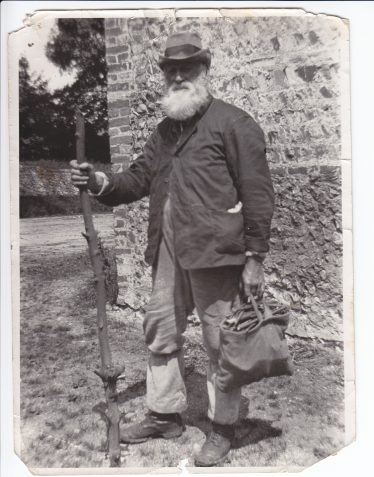 SPENCER MUGRIDGE – The man with the rake!

A family of S’s

Spencer Mugridge’s parents were Samuel and Sally. They were born in about 1815 & 1817. Spencer had several brothers and sisters. Solomon was the eldest; others were Sarah, Sam, Sophia, Simon and Stephen. Spencer, one of the younger ones, was born in 1852.

He appears for the first time in the Buxted 1861 census when he was aged 9. In the 1871 he is absent from the Buxted census as well as the one for Stanmer. In this census for Stanmer, Solomon, his oldest brother, is present with his family – a wife and 1 son.

Spencer is resident in Stanmer for the 1881 census along with his wife Alice a.k.a Annie and their children; Spencer, Annie & Trayton. In the 1891 census for Stanmer there are more children born to them, they are; Bessie, Frederick, Mary & Louise. One more child was born to them after this date, she was Carrie. She later went to marry Edward Honey. Both of them are buried in Stanmer churchyard very close to her parents’ graves.

A short but distressing illness

Spencer Mugridge was married to Martha (nee Hutson) before he married Alice. Martha died aged 21, her gravestone reads; “of a short but distressing illness”.

Spencer Mugridges’s parents were still living in Buxted at the time of the 1881 census. Samuel was then aged 68 and Sally aged 65. Living with them at this time were three grandchildren; Sally Mugridge aged 12, George Mugridge aged 6 and Edward Mugridge aged 4.

Their surname is spelt MUDGRIDGE in this census. All of Samuel and Sally’s childrens’ name began with “S”. Spencer Mugridge died in 1932 and his wife died in 1928. They are both buried in Stanmer churchyard. There is a picture of Spencer in the museum. It was taken in 1928 and it shows Spencer sporting a long beard and holding a big rake.