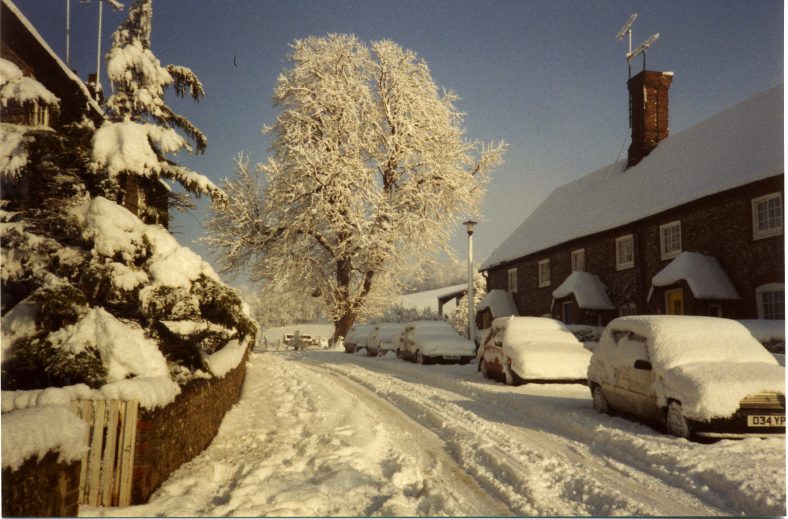 It’s winter in Stanmer, the branches are bare,
The smoke from our woodburners hangs in the air.
When there’s frost on the ground, and it’s nippy but dry
The pale winter sun travels low in the sky.
But on chilly wet days, when it rains cold and hard,
From the Lodges to Stable Block, Village and Courtyard,
We keep snug in our homes, with warm slippers and soup
And stay in touch with each other through our WhatsApp group.

It’s winter in Stanmer, and up in the woods
The walkers are wearing their big coats with hoods.
And their scarves and their mittens and fleecy lined wellies
And the dogs with short legs all come back with wet bellies.
While the Golden Retrievers must jump in the pond
No matter it’s freezing and they know that it’s wrong.
And the rest of the doggies just pretend they don’t care
That their owners have dressed them in knitwear.

It’s winter in Stanmer, birds puff up their feathers,
The cows stamp their hooves and the sheep press together.
The mice are tucked up in their holes in the wall
While the badgers are waiting for night time to fall…
And then, in the shadows, with the fox and the owl
They pass through the village to go on the prowl,
While the rabbits stay cozy deep down underground
And the moles make their molehills while no-one’s around.

It’s winter in Stanmer and we’re waiting for snow,
Stanmer House fills the air with a bright neon glow.
It’s open on Sundays, and the Stanmer House Band
Has everyone singing along and it’s grand.
Now we’re down in the Church, and more magic is spun
As the songs of the season ring out, one by one.
We are friends, neighbours, family, some young and some old
And the warmth of our gathering has banished the cold.
We’re the Stanmer community – and how blessed we all are
To be here in Stanmer, under this Christmas star.