You are here: HomenextPeoplenextAl Brookes 1962-2021 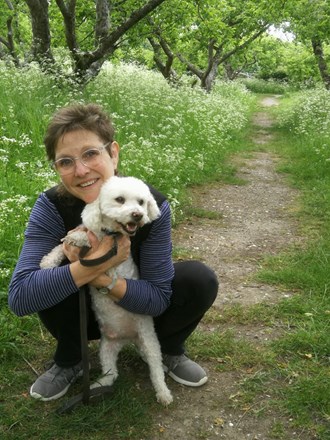 One evening about nine years ago a note popped through my door at No 6, Stanmer Village.
This was a beautifully written plea for any available accommodation in Stanmer from a writer looking to be able complete their book in the peace and beauty of Stanmer. I was impressed by the way that this was written and responded with the contact details for the managing agents of the rental properties – we can share!

About a year or so later a striking lady was pruning the garden of No 14 with her little dogs and Alison Brookes, with Elfie and Tommy, came into our lives.
One of Al’s many talents and gifts was clear, sensible and straightforward communication. She soon became quietly involved in the re-forming of the Residents’ Committee, which was essential for open communication with the various bodies which were taking the Stanmer Restoration Project forward. Al was instrumental with others in the forming of Stanmer Trust, to ensure that open and regular communication between everyone involved in the estate could be possible. She had a vision for a website that would provide up-to-date and interactive information about ‘all things Stanmer’.
She completed and published her book, for which she received several notable awards and continued her valuable employment with Sussex Police, including educating officers of all levels about domestic abuse.
Al also became a member of the Stanmer Preservation Society executive committee and eventually became their chair. to which she brought her intelligent, organised and pragmatic overview. Her role there was sadly cut short by an unexpected return of a previous cancer, with a terminal diagnosis.
Even after this huge shock Al continued to pour great energy into Stanmer – work-time swops with gardening, practical support for neighbours and presenting an innovative (and successful) presentation to the council about a village parking scheme. Shortly before her death she was still active on the village WhatsApp, putting forward support and suggestions for wildlife and the church pond.
Al passed away peacefully in her beloved home in Stanmer on 10th November 2021, at the age of 58. Her clear, warm, kindness had won her very many friends and she has left a substantial hole. For quite some time we will be saying “What would Al say?”…..